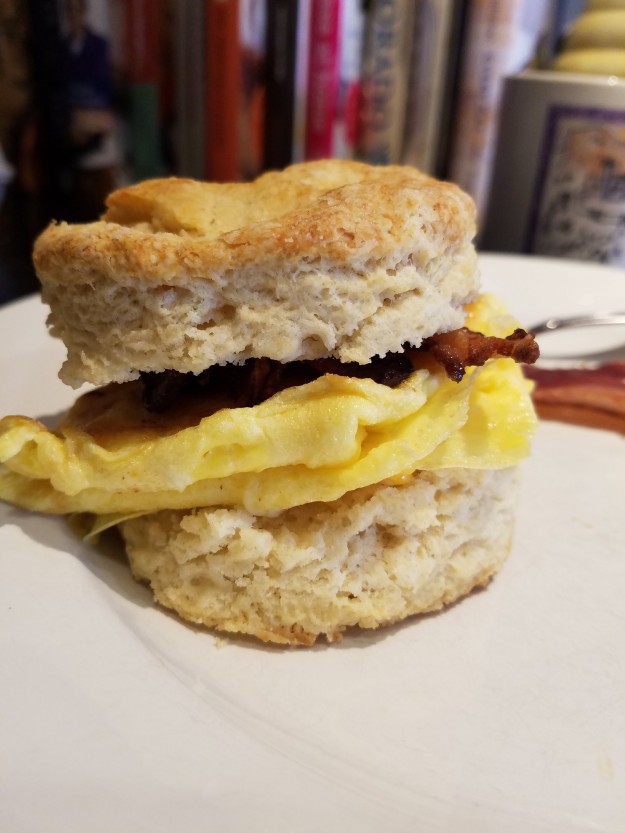 The truth is, I didn’t make any fancy breakfasts last Friday.  But Fancy Breakfast Wednesday just sounds weird.  Luke’s birthday was Wednesday and he requested an omelette for breakfast.  I decided to go big, and do bacon and biscuits to go with the omelette.  I used this biscuit recipe and it was pretty good.  Luke’s omelette was an absolute disaster because I messed up the fold. He said it was good though, because he is a polite gentleman.  Jack’s was perfect because between making Luke’s and Jack’s I remembered how to make an omelette.  Dave requested a bacon, egg and cheese biscuit so that’s what he got.

I don’t know if this recipe makes taller biscuits or if I am just making them taller.  I suppose I will continue on the quest to perfect the biscuit.

I also made this cake, but I used clementines and chocolate chips instead of lemon and blueberries because the clementines were languishing in the fruit bowl.  It was kind of amazing.  I cut the sugar from 1 cup to 3/4 a cup.  Dave was surprised that I was able to make this cake when we were out of milk… but it called for yogurt.  (Dave hates yogurt, but you can’t tell when it’s in a cake.)  What no one in my family knows is that I was a little short on yogurt.  And out of milk… so what did I do?  I used a little mayonnaise.  Everyone hates mayonnaise so it’s amazing that everyone loved this cake, right?

Lastly, it was Luke’s birthday and he requested the peanut butter ice box cake from the New Smitten Kitchen cookbook.  I bought the cookies, pre-made and then I rallied and made the cookies from scratch.  It was actually pretty easy.

So anyway, after a fancy Wednesday and two cakes, I took Friday morning off.