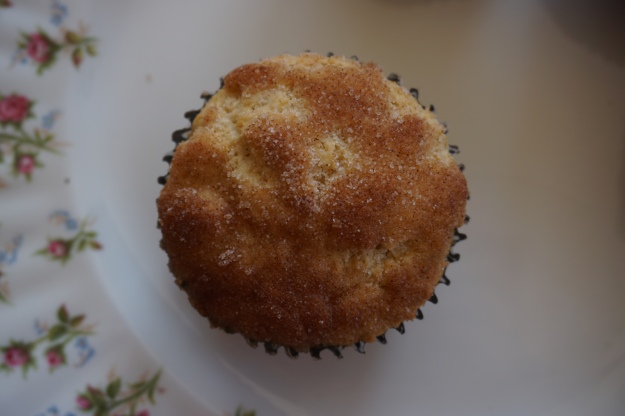 I went snowboarding one day last week with my friend Laura said she recently had to  defend a delicious breakfast muffin against an accusation that it fell into the realm of the cupcake.  I said, “Tell me more”.  She said, “Well it really was just a white muffin.  Then you dip it in butter and then cinnamon and sugar.”  I was sold, and I knew just the muffin to make.

Many years ago, we decided to make Higbee Muffins for Thanksgiving dinner.  I’ve made them on and off for Thanksgiving since then.  But I always think, “Isn’t this just a frosting short of a cupcake?”  That’s how I knew it would be the perfect muffin for this Fancy Breakfast Friday.  I have one memory of making the famous Cleveland muffins in high school from a recipe in the paper, but no memories of that special trip to Higbees, where you got dressed up, went shopping, and ate the historic muffin.  I used this recipe from Cleveland Magazine titled “Historic Eats” because it sounded legit.  The weird thing to me is that the first time I made these, I swear the top was perfectly smooth.  Ever since I have made only lumpy muffins.  I did find one recipe that called for the butter to be creamed with the sugar instead of melted and I think that’s the difference.  But which recipe is correct?  If you had a famous Higbee Muffin, was it a little lumpy?   For the purpose of this breakfast, lumpy was the way to go because of the added nooks and crannies. 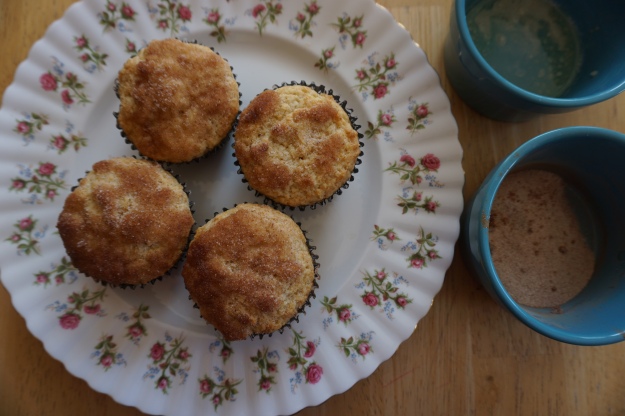 I mixed the dry ingredients the night before.  In the morning I added the eggs and melted butter and baked the muffins.  They cooled a little before the boys got up.  I had melted butter and cinnamon/sugar in pretty dishes and the boys got to dip their muffins in each.  It was fun and different and delicious.  I also halved the recipe so they wouldn’t go stale and/or be eaten to excess.  I just dipped and coated the leftovers and we ate them the next morning.

Muffins were served with orange juice, a side of fruit and a bowl of yogurt.  Thanks for the great idea Laura!!