Jack requested a Mad Scientist Birthday Party this year, and since he was turning the big 5, I decided to go for it. I’ve always harbored a secret desire to have a Chuck E Cheese (aka Chuckie Cheese) birthday party, because I wouldn’t have to do anything besides spend money, and be at Chuck E Cheese, and it would have the added bonus of turning me into a pariah among the moms, but when I suggested it this year, Dave said no. I was trying to figure out how many kids to invite, so I went to the photo evidence of Luke’s 5th birthday – turns out, Luke used to have big birthday parties before Jack was born! Every year! So then I had to really try to create a fun birthday for my poor, poor, poor 5 year old, who has only had family and family friend birthday parties, lo these many years.

Onward. I hit google, and bookmarked this blog, and then copied everything she did, but with fewer kids, and a little more lazily.

For decorations we made a “pin the accessories on the mad scientist” game, and the boys made bow ties for everybody to decorate and wear. I put dry ice in glasses of water, and I made jello with gummy worms in it to look creepy. Those may actually still be in the fridge. I should look into that. Each kid got a t-shirt to wear over their clothes because I couldn’t find decent (cheap) lab coats, and they each got a pair of goggles to wear. 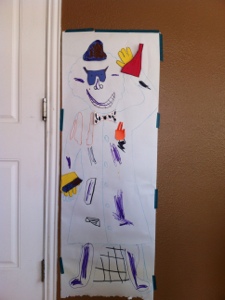 For the experiments, we started with Oobleck – which the boys and I made the night before. It is so fun to play with that I sort of went into a trance for a while.  I also had all he ingredients for making slime and I was going to let the kids do that themselves, but oobleck wasn’t a hit with everyone and it was more than enough for the kids that like to get messy. 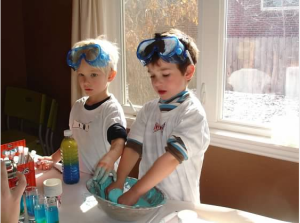 I also had water traveling from one glass to another, which was kind of a fun experiment for the Luke and Jack, but no one at the party cared about it.  (Too slow.)
Then we did the floating M, which did not work in practice, but worked well at the party.

Next we tried, in vain to bend water with static electricity, but no one’s hair was clean enough.  I only tried it on my kids, because of the lice epidemic of 2011.
And then we decided to take things up a notch.  I had filled a bunch of test tubes with vinegar, and attached balloons filled with baking soda.
Each kid got a set and they got to shake the balloon to let the baking soda into the test tube.  The balloons filled with air, one exploded, and a good time was had by all.
Then we did the milk/food coloring soap thing, which was very cool, and then we made a lava lamp out of oil, water and alka seltzer, then they added alka seltzer to the milk and food coloring.  (No link for that one, that was just pure mad science.)
Elephant Toothpaste  was the penultimate experiment and  that was very fun. 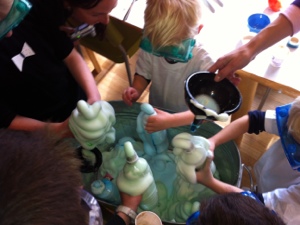 Lastly, we had everybody go outside to watch Dave slide a tube of mentos into a 2 liter of diet coke and have the spray reach about 18 feet in the air.  Excellent work there Dave.  But I am too lazy to upload the video.  Trust me, it was a sight to behold.

For lunch we had the traditional birthday snake, five years in, you’d think I could make one where the cheese doesn’t slide out the side.

Jack requested the same cake as last year (Root Beer Bundt Cake) but since it was a mad scientist birthday, we added trick candles and I put dry ice in the middle.  My original plan was to make a cake in the shape of an Erlenmeyer flask, but that proved to be too challenging.  Still – this was a hit. 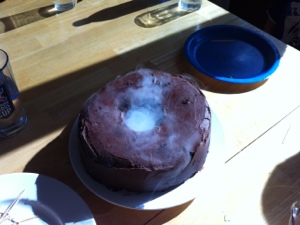 After the party, as a fine film of baking soda settled over the house, and after I cleaned and helped Jack build lego kits, I finally got a chance to put my feet up and rest.  And then Luke said, “You know what we should do?  We should do something really fun to celebrate Jack’s birthday.”  I’m not sure what he had in mind, maybe Chuck E Cheese?