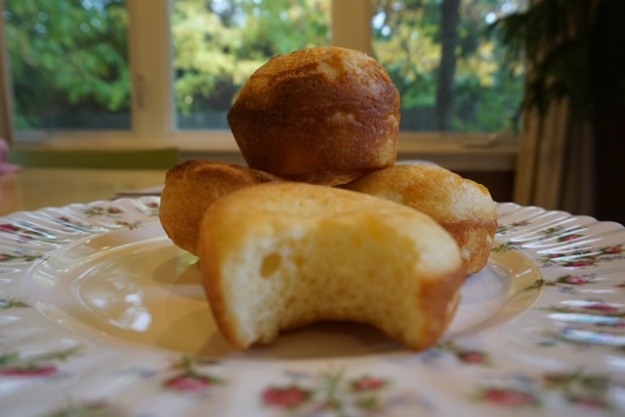 I had planned to do a month of apple breakfasts and then a month of pumpkin, but last week I decided we needed a cake break.  I flipped through some cook books and I found a popover recipe.  I thought to myself, “I think I made these before and they didn’t really pop and no one was impressed.”  Somehow that process led me to making them again, with similar results.  They were good warm, and good reheated with some cream cheese, but I wanted a big puff. So Jack and I had a fancy breakfast Saturday with a different recipe and those turned out much better! 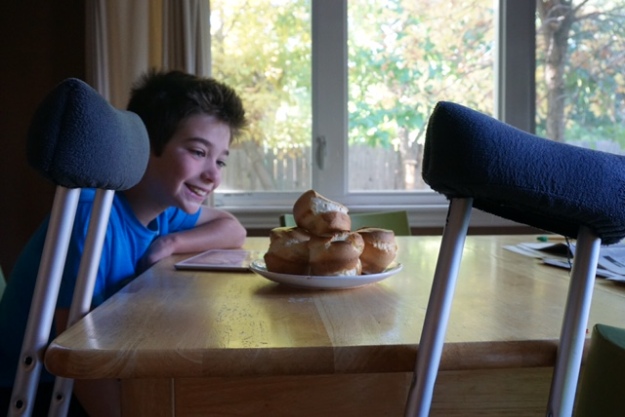 This recipe is from King Arthur flour, and it was for 12 popovers, but I halved the recipe.  Somehow I ended up with 8 popovers, and I am pretty good at math.  This is now my go to recipe.  I mixed it in the blender and I used the scale for all the dry ingredients.  Very fast and easy. I tried to make it another day as well but the kids said I should really be focusing on cake for breakfast, not perfecting my popovers.  Marian Cunningham had a weird version with oat flour and marmalade that sounded so bizarre I have to try it.  Stay tuned.

I served the popovers with a blueberry, banana yogurt, orange juice and skoop smoothie.