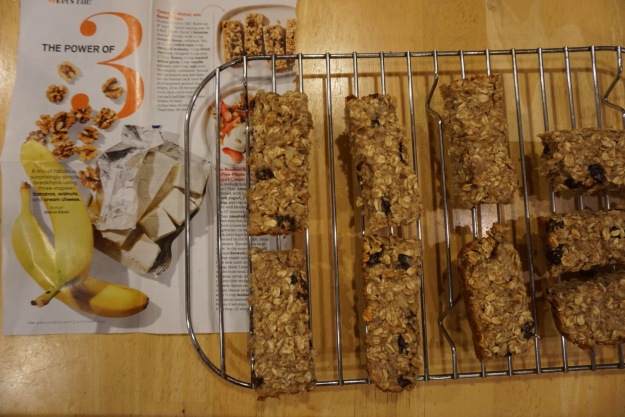 Since school started, we have had a bunch of after school snack sessions like this,”Here’s a peanut butter and jelly sandwich and a glass of milk.  And a banana.  And a bowl of yogurt.  And I guess you can have a granola bar.”  And so on until dinner time.  We also need snacks for school, and during and after practice. So I started to research healthy and hearty snacks.  I spent so much time thinking and reading that by the time I got to baking, I only had 20 minutes before I had to leave to do pick up Jack.  In the 20 minutes I had,  I made “Frankenstein Rice Krispie Treats.”  I used 75% of a bag of marshmallows (the goal here was to get rid of the marshmallows in some way other than opening the pantry, untying the bag, eating a marshmallow, closing the bag, putting the bag back, closing the pantry and then starting over again a couple minutes later.)  I used regular cheerios instead of rice krispies, and I threw in a blob of peanut butter and and I topped it with some m&ms.  (about 75% of an individual bag of m&ms.)  Thank goodness for the M&Ms because it turned out sort of… brown.  Tasty, but nothing to write to pinterest about.  The boys liked it.  I only got a little melted marshmallow in my hair.

Next up, I made a frankenstein version of these Peanut Butter Apple Bars.  Instead of a shredded apple, I put all the non mushy parts of all the fruit in the fruit bowl into the food processor and came out with a random amount of nectarine, apple, and peach.  I added extra oats because it seemed necessary.  And as a rule, I do not measure peanut butter because I am 100% sure I can eyeball 1/4 cup of PB.  These bars came out… ok.  A little dry, but I served them for breakfast with a bowl of yogurt, and they were eaten after school a bunch of times too.  Very hearty.

The problem with my obession with adding peanut butter to everything is that then Jack can’t take it to school because his classroom is peanut free.  Or is it nut free?  I may have just made another snack that can’t be taken to school.  Pictured above are the fresh from the oven Oatmeal, Walnut, Banana bars from this month’s O magazine.  As you can see, I #nailedit.  But we’ll have to see if this recipe is a hit or not – they have a tanginess from the cream cheese that may not be loved by certain boys.  And nuts are always risky. I hope they like it, because it took about  2 seconds to make.  I had picky eaters do the mixing while I measured/eyeballed the ingredients.

Another day, another z bar for snack.