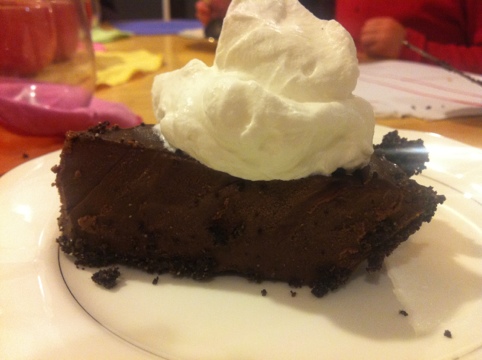 I made a “classic diner style chocolate pie” from the Baked cookbook for Valentine’s Day. It’s definitely filling a void in my life where cake used to be and which pie has been half-assedly attempting to fill. Fruit pie that is. Chocolate pie is a whole different thing. Chocolate pie is good for breakfast, lunch, and dinner. And it is chocolatey.

I am calling it substitute pie, because it was 12 degrees on the day I made it, and I refused to go to the store for the many ingredients I didn’t have. So instead of Ovaltine I used cocoa powder, instead of milk and dark chocolate, I used semi-sweet,  instead of whole milk, I used a combo of heavy whipping cream and 2%, and vanilla paste instead of a vanilla bean.

It is supposed to be frozen for 4 hours before you eat it, but the question is, then what?  I made it two days in advance, and on Valentine’s Day I re-read the recipe. How soon before we want to eat it do I take it out of the freezer?  The answer is unknown, but it’s definitely longer than “immediately before dessert.”  I took the pie out and start to hack away at it for a couple minutes before we decided we needed 20 minutes to do dishes and let the pie warm up.  I told the kids we’d just have to wait a day for pie and they were devastated.   Twenty minutes later, it wasn’t any easier, but we suffered through some cold and delicious pie.

I cut the first round of pieces too big, and the look on Luke’s face slowly became frightening.  He was really trying to finish, because it was really good, and I am sure he didn’t want to let down Team Pie, but he sort of looked like he was going to either cry or throw up.  I had to tell him there was no shame in not finishing your pie.