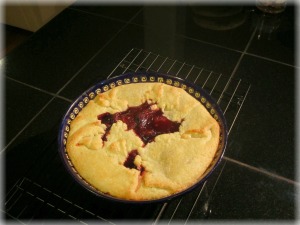 Did you know that today was (in)ternational pie day?  Seems like it would be on March 14th, but that’s because I am a nerd.  Regardless, today was a good day for Team Pie.  Luke asked if I was going to join team pie, and I said, “Sure, why not?  It’s Pie Day.”  Then Jack started sobbing, so I had to renew my allegiance to Team Cake.  Either way, I have 10 pies to bake this year, so today was a good day to start.

I was secretly hoping that Luke was going to hear that it was Pie Day at school, then come home to surprise me with the news, only to find a pie cooling on the counter.  But I guess it’s also Chinese New Year?  Oh well.  Oh, and the pie was still in the oven, and I was heading out for a girl’s night out, so I had to tell him how to do the milk and sugar glaze and then I headed out.

Long story short – I made a rustic plum pie, because I had some local  plums that our neighbor had shared with us this summer, and there was such a bumper crop that I froze a bunch.  But that’s a story for another post.  I made two changes to the recipe: I used only 1 T of lemon juice because I was afraid it would be too tart, and I used half brown sugar instead of all white because I ran out of sugar, if you can believe that.  AND I didn’t measure the plums.