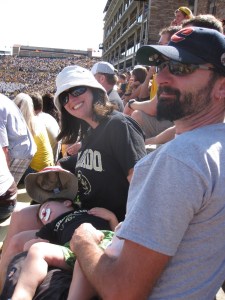 We took the boys to a CU game recently. Got there sort of late, left early, napped through the middle, and yet somehow Jack absorbed the fight song. The game was a few weeks ago, and yet it wasn’t until this morning that Jack was running around the house saying, “Shoulder to shoulder. Fight! Fight! Fight!” I felt the need to explain it all to the daycare teachers this morning in case all they heard was “Fight!” and all they saw was a fist in the air. The teacher said, “Oh I know. He says, “Go go go Buffaloes!” all the time. Especially when he sees a buffalo. There’s one in the sand box.

In other news, we ate a late dinner on the patio and enjoyed a beautiful fall evening as the stars started to come out. Dave said, “I see one, two, three stars. No, four.” And then Jack said, “Five.” Yes, my little genius knows some numbers. He also said “Seben. And eight, eight, eight.” But when I tried to get him to count starting at 1… well, I regretted it. Because when he starts at one, he can’t stop himself from following “one” with “two, three, GO!” And then he jumps up and down a bunch of times. Yeah, I know, it’s really cute, but when he is standing on your lap it’s not that great.

Hmm, what other cuteness? Jack and Luke were kicking the soccer ball in the back yard and Jack fell. Dave was trying to get him to just shake it off and keep going. Jack said, “I tan’t. Leg hurt!” But then once he got a kiss from his daddy and big brother, he was just fine.

Speaking of the big brother, he was at the game too!

3 thoughts on “>Shoulder to Shoulder”