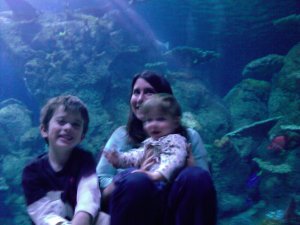 Megan without a G is mean. As in, “Megan doesn’t have her G today!” a common lament heard throughout my childhood. OK, so I am mean. I considered making a new years resolution to be nicer but immediately dismissed the idea. I think some of my humor comes from a tiny mean streak that I have, and I don’t want to lose my sense of humor. Exercising and eating right seem like more attainable resolutions anyway. I only had four cookies today so I am off to a great start.

If you know me, and you don’t think I am mean, I am sorry to say that you just haven’t known me long enough. One day, you’ll think, “Hmm, yeah, I see it now.”

Or maybe you won’t have to wait that long. Just read on, and see what I mean.

We went to the Aquarium for my birthday and I was sitting with both kids on my lap, posing for a picture in front of the shark tank. It was the area of the aquarium that was the most wide open, with the fewest people and the largest, widest tank you could imagine. I mean, sharks live in there. It was big and spacious. Plenty of room for everyone.

And just then the mom swooped in and scooped him up. To me she said, “Well you didn’t have to be so mean to him!”

So if I know that I am mean, but I don’t realize that being sarcastic with a 2 year old warrants a tongue lashing from a stranger, apparently its much worse than I thought.

2 thoughts on “>Megan without a G”