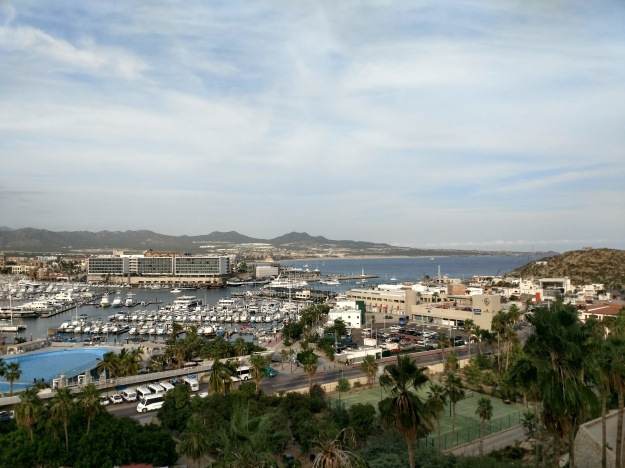 It’s catch up day here Meta Megan on this beautiful Fancy Breakfast Friday Morning.  Is it beautiful out? I have no idea, I’m just looking at this photo and thinking of where I was last week.  Dave and I went to an all inclusive resort in Cabo San Lucas Mexico to celebrate our 20th anniversary.  This is the view from the breakfast buffet.  The food was delicious.  I left some cereal for the kids and Aunt Suzy!

I skipped a couple FBF posts in November, and I had two good excuses.  I made waffles both Fridays and they were fine, but I didn’t take any pictures.  I made pumpkin waffles the day after Thanksgiving, but I realized after I started that I didn’t really have time for waffles, and I made half the batter into pancakes.  They were just OK.  Nothing to write a story about.  But speaking of stories, in November I did NaNoWriMo, where you write a 50,000 word novel during the month of November. (I guess it’s really a novella.)  I did it, and I was very proud.  The main thing I learned was that if I have a plan, I can easily write 2,000 words in a relatively short period of time.  The other thing I learned was that if I keep typing, words will come out and then I’ll have a first draft to work with.  Lastly, I learned that I have no desire to ever let anyone read anything.   But my goal is to write a book, not to have people read my book, so mission accomplished!  Just kidding, I plan to get back to writing and see what I can come up with in a second or third or 10th draft.

The last bit of exciting news is that I went to see the Smitten Kitchen author this week and I bought her cookbook! As I type this, the kids are eating not one but two recipes from the cookbook for what will be an exciting FBF post next week!