I made these a couple weeks ago, so I can now look back on them lovingly and fondly.  They were beautiful and delicious.  Here is the recipe from Smitten Kitchen – I used vanilla instead of bourbon because I was feeding it to children… for breakfast.  Breakfast pie is decadent enough.

It was just too hot to be working with a buttery dough.  It was very hard to roll out, and I plan to never make them again.  I wanted to make these because I had ordered 8 pounds of peaches and I didn’t want any to go to waste.  However, Dave had plans to eat 8 pounds of peaches, so he had to go buy me some sub-par grocery store peaches that I was allowed to cook.

Unfortunately, I was too conservative with the filling, so I had a ton leftover. (Not to mention my dough to peach ration was off.) Fortunately, I had a puff pastry in the freezer and I baked it with a layer of crème fraîche and the rest of the filling.  Not as pretty, but still delish.  And the boys seem to like crème fraîche which is odd for them. 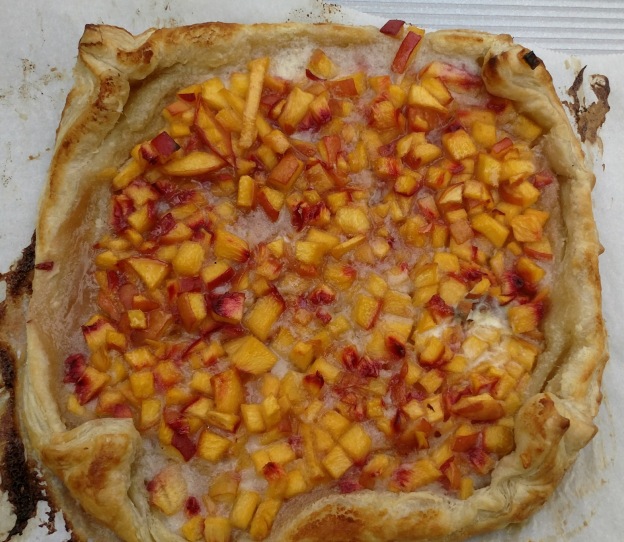 Meanwhile, in peach news, I ordered 20 pounds which should be coming in two weeks, and I don’t know if I will be allowed to cook them or not!  If I do, I am going to stick with my famous peach cobbler.

Here is one more picture of the never to be made again, delicious peach pies.

There was an error retrieving images from Instagram. An attempt will be remade in a few minutes.