Man I miss my fancy camera.  (It’s in the shop.) FBF isn’t the same with ye olde iPhone camera.  But guess what?  The sad and lonely days (weeks) of lame FBFs have come to a glorious end with a very fancy challah bread that I stuffed with apples, cinnamon, and brown sugar.

I’m not going to give you the recipe because I am way to lazy right now to type it up and “make it my own” so just buy the Smitten Kitchen cookbook or get it from the library and then make the changes I suggest.  Oh, but guess what, I found the recipe online.  So instead of fig+olive oil + sea salt, I did apples, cinnamon and brown sugar.

This idea came to me when I noticed my neighbor’s apple tree was going crazy and I stole as many good looking, worm-free apples as I could without feeling like maybe I should knock and ask if it was OK.  This was about 5 apples.  Then I sliced them thinly, and sautéed in butter, put about 2 T of brown sugar in and then looked around for a recipe for something to braid around the apples.  The challah looked like I winner so I went with it. 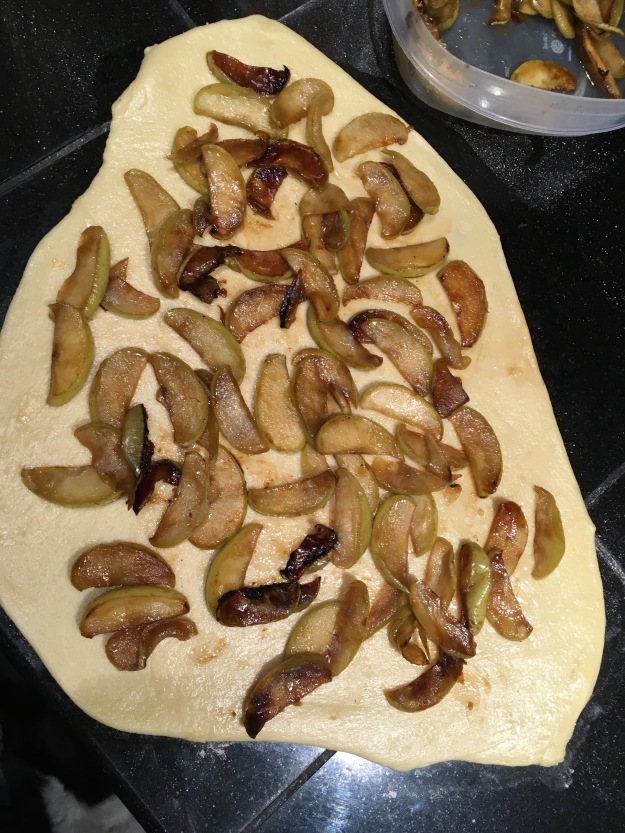 I actually forgot the cinnamon at first so I just sprinkled a little on the apples after I spread them on the dough. 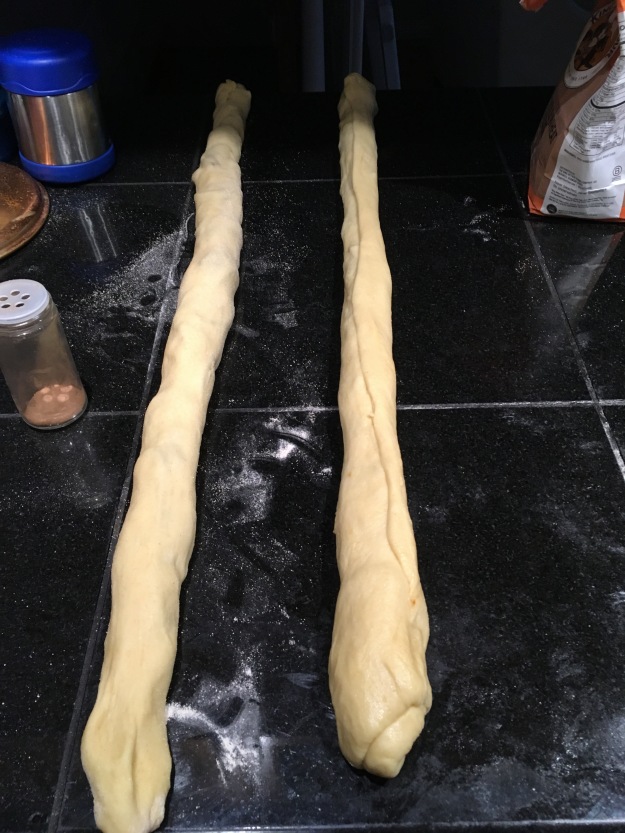 I promise you, my counter was very clean before I started, and that is just butter, sugar and flour that you see.  I thought this part would be stressful, getting the dough rolled out to counter width (about 30 inches at my house) but the dough was so smooth and stretchy it was no problem.

I’m thinking I went wrong somewhere with the braid, but what can you do?

I sprinkled the top with turbinado sugar after brushing it with egg.  I made this all the night before because there was nowhere in the recipe that said, “refrigerate this and just bake in the morning.”  I also had to add at least 15 minutes to the bake time, but thankfully the recipe said to get the internal temp to something like 190 which prevented me from taking this out way too early.  Kids would have been late to school if I tried to make this one in the morning.

We ate a delightful dinner while this sat on the counter and wafted under our noses.  I said, “Why not have a slice now for dessert and another slice in the morning for breakfast?”  Dave was in favor of waiting, which comes as no surprise because he doesn’t like the opening of any gifts before or after the day of your birth or the birth of Jesus.  Whereas I would say, “Why don’t we exchange gifts now, before we travel so our suitcases will be lighter?”  But that’s just me being practical.  And also not being into delayed gratification.   The thing about Fancy Breakfast Friday is, it doesn’t need to be confined to Friday.  Already it’s bleeding into other days because I have improved my breakfast game over the last year.  FBF for dessert on Thursday?  Yes.

So now I can also say it is delicious warm, and also delicious at room temperature the next day.

And yes I did take some to my neighbor to thank her after the fact for the apples.  But I gave it to her teenage son, so I’m not sure if it made it in the house.

*** This is the 53rd FBF.  I was going to do a 1 year anniversary special but I guess I missed it!  Look forward to that coming soon.