We had dinner at Murphy’s last Thursday because they have a TV and the Buff”s were on. Luke ordered the grilled cheese, for the last time. He didn’t like it because of the “bread” and the “cheese”. I have forbidden him from ordering it again, but I should really just be proud of him for ordering the fruit as a side dish instead of the french fries. Fully 25% of his fruit cup, though, was taken up by one grape. It was a really big grape. We were all marveling at it’s magnificence when it slipped out of Luke’s hands and onto the floor. The 5 second rule does not apply in bars though, so it didn’t get eaten. I did, however, agree that if he wanted to, he could bring the grape home and we could continue to think about how it’s the biggest grape we’ve ever seen. I told him to put it with the pumpkins, and he said, “If it gets exposed to the light! It is going to turn into a PRUNE!” I started to remind him that grapes actually turn into raisins, but it seemed silly, since this one would probably, actually, turn into a prune. Except now that I have taken 2 pictures of a grape, and written 214 words about it, I think I should probably just put it in the compost now and forget this whole thing ever happened. But first, the grape with a penny for perspective: 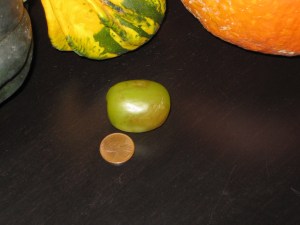 4 thoughts on “>Still Life: With Grape”